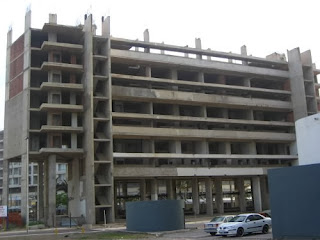 Details from a forensic investigation showed that R10 million was the usual limit for approval of loans of this type, but the board of the Ithala Development Finance Corporation signed a cheque for R83m for Dolphin Whispers.

And this was done without any suretyship from the majority shareholder, who was said to be an agent for Singh, and without a bond for the property.

When it crashed - apparently when other shareholders kicked Singh's Prainder Civils off site for poor workmanship - it crashed spectacularly and Ithala had no way of recovering its money.

In a glossy August 2005 'bank pack' to secure funding for the upmarket development, Jay Singh is listed as one of the 'core team' of Prainder Civils, 'a typical family business' which scored the R46m building contract.

But investigations by forensic auditors - hired by Ithala to probe how it all went wrong - showed that on paper the company was owned by Harikrishen Hansraj, once a fellow director with Singh in Remant Alton, which bought the city's bus fleet in a privatisation deal for R70m in 2003 and sold it back to the city for R405m five years later.

According to the audit report compiled by KPMG in 2009, Hansraj was also the majority shareholder in Dolphin Whisper Trading, his company Tiarella owning 60 percent, a fact undisclosed in the initial funding application and which was never picked up by Ithala officials.

The balance of the shareholding was held by two other companies with 20 percent each, one headed by Nelson Mandela's granddaughter Nandi Mandela with architect Marcel Henry and engineer Henry Masinga, and the other made up of quantity surveyor Vaughan Charles, engineer Craig Simmer and Dan Cloete, who was once the operations manager at Remant Alton. Also never queried was the apparent conflict of interest with directors and indirect shareholders also being service providers, the company paying out R25m for professional services to them.

The report also red-flagged the fact that in approving the loan, the board resolved that Ithala was to acquire a 30 percent shareholding in the company for a substantially discounted price of R3.6m which could have been highly profitable. But this never materialised. Another condition was that Ithala had to ratify the contractors involved in the project, but this was not done.

The report also alleges a 'conflict of interest' between a non-executive director of Ithala, who was a director of two other companies with Charles, Mandela and Simmer and which appeared not to have been disclosed.

This person was a member of a task team appointed by Ithala when the problems with Dolphin Whispers first arose.

While not mentioned in the report, Hansraj made an urgent court application at the time, stating Masinga had kicked Prainder off the site.

A new contractor, Dezzo Projects, was hired, but Ithala then cancelled the loan and the directors of Dolphin Whispers put the company in liquidation. After the liquidation proceedings were launched, the auditors were told that the board had agreed that the building be 'abandoned to Ithala' and the claim by Dezzo Projects - which had a builder's lien - would be settled. The auditors recommended that the board be held accountable for approving the loan and named several staff members who should also be held to account. However, the report noted, most had already resigned. It also noted that Hansraj had refused to speak to the auditors.

He failed to respond to messages from The Mercury.


•Last week Singh's name was in the news over his involvement in the ill-fated Tongaat mall, whose collapse killed at least two people. The developer was Gralio Precast, owned by his son, Ravi Jagadasan. THE chief executive of the KwaZulu-Natal government- funded Ithala Development Finance Corporation - fired last year for misconduct and negligence for his role in the disastrous Dolphin Whispers development at Durban's Point precinct in which controversial businessman Jay Singh was the main contractor - is still fighting to get back his R2 million-a-year job.

And legal sources, who have been monitoring the proceedings against Vijay Misra, who also held the positions of chief financial officer and acting chief operating officer, said the costs of the forensic audit - which filled 45 lever-arch files - an 11-month-long disciplinary inquiry and a continuing Commission for Conciliation, Mediation and Arbitration (CCMA) battle had run to 'many, many millions', with talk that it could have cost Ithala more than R40m to date. This is on top of the R60m it is estimated to have lost in the failed deal.

The concrete skeleton of what was to be an upmarket waterfront residential development was abandoned for years, but contractors have recently moved back on site.

The issue is back in the spotlight because of the involvement of Singh in the project. It was funded by an unprecedented unsecured R83m Ithala loan, but failed when the main contractor was kicked off site, allegedly for shoddy workmanship.

Dolphin Whisper Trading 23 - whose directors included Nelson Mandela's granddaughter, Nandi Mandela - was placed under liquidation by its directors in 2008 after Ithala withdrew the loan.

Misra, who is a chartered accountant, was charged with 41 counts of misconduct in connection with the 2005 Dolphin Whispers loan and others, including one deemed 'party-related' and involving May Mkhize, the wife of thenKwaZulu-Natal premier Zweli Mkhize.

The disciplinary inquiry before UKZN law professor Brenda Grant began in May 2011 and was finalised a year later, after evidence was heard for a full 20 days. With regards to Dolphin Whispers, Misra was found guilty of drafting, without following policies and procedures, a 'wholly inappropriate' loan that had exposed Ithala to a 'level of high risk'.

During his evidence, he spoke of 'political interference by senior political figures who had a great deal of influence over the granting of loans'.

He also alleged 'corporate bullying' by then-chief executive Sipho Nyembezi, claimed he was the scapegoat and said he was not responsible for what happened.

But Grant said Misra had not suggested that he'd acted under duress, or out of fear or intimidation, to improperly secure or approve a loan.

As the chief financial officer and acting chief operating officer at the relevant times, he had statutory obligations to protect the interests of Ithala.

Grant ruled in May last year that in spite of his '11-year unblemished service', Misra be immediately dismissed.

At the time he was Ithala's chief executive and had a fiveyear contract that was to expire in December next year.

Misra then approached the CCMA.

The hearing, already in its second leg, has been set down for the rest of this week, with Ithala's legal bill still climbing.


•In response to e-mailed questions on the Dolphin Whispers project and its former chief executive, Vijay Misra, Ithala was tight-lipped.

Group chief financial officer Fain Ferguson would not say how much more the project was expected to cost.

Ferguson said that, because the matter involving its former chief executive, Misra, was continuing, Ithala was not at liberty to disclose the cost of the KPMG probes into his dealings or the Commission for Conciliation, Mediation and Arbitration (CCMA) process.

Neels Brink, project director for the Durban Point Development Company, agreed that the half-finished Dolphin Whispers project had been an eyesore.

However, he said that Ithala Bank had managed the mess and had the construction site tidied whenever asked.

He said it was 'excellent' that construction work was again under way on the eightstorey building - which was expected to be completed in the second half of next year.

Despite the controversy around the project, Brink said that it was 'structurally sound' and it had not been necessary to have the entire building knocked down.

Ithala first made known plans to rescue the failed development in 2010.

In February this year, it finally announced that construction would resume, and the site, initially intended to be a residential development, would serve as an office park.