End in sight for nightmare on Pretoria roads

I have blogged on a couple of occasions bemoaning the fact that I have to endure the absolute chaos that has been created in the City center by the construction of the bus routes.  As part of my duties, I go to the Deeds Office several times a week and suffer the extreme frustration of the roads having been narrowed to a lane or two and all the delivery vehicles simply stopping in one of these remaining lanes to do their deliveries.

When you eventually reach your destination, you find that they have taken away all the metered parking.  Crazy!

Anyway, at least they will rapidly finish the project ... NOT! (Completion date is 2016 - and we know how good the public service is at meeting deadlines - think Madupi.)

End in sight for nightmare on Pretoria roads

Come April, the traffic nightmare along Nana Sita and Paul Kruger streets could be over as the R3.5 billion Tshwane Rapid Transit system takes to the road. 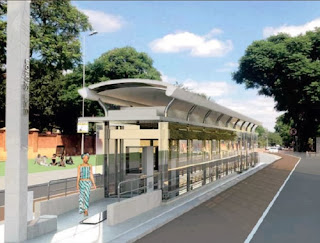 An artist's impression of the Tshwane Rapid Transit station in Lynnwood Road next to Loftus Versfeld.

Two 'memory box' bus stations will be built along Paul Kruger to allow TRT, or A Re Yeng, commuters to see the heritage sites along the route. The A Re Yeng system will have 47 metro tram stations across the city and two memory box stations on the Paul Kruger line. According to the city, the memory box is a 'successful marrying of the old and new, where the transparent use of material does not obscure the view of the heritage and historic buildings along Paul Kruger street'.

The memory box will be at the station on Paul Kruger between Struben and Johannes Ramokhoase streets and between Church Square and Pretorius Street.

The tram stations will be of modern design but also evoke the imagery of the old tram lines.

So far, the Hatfield station, next to the Gautrain station, is the only one that has been completed. 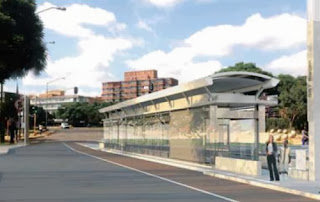 An artist's impression of the Kotze St station in Sunnyside.

Lungile Madlala, the city's strategic executive director for transport, said the design would encourage people to use the buses.

'The design is modern and it will appeal to everyone. We want people who usually use a Mercedes-Benz to get to work, to use it.'

She said the city was still deciding whether to use current buses in Soshanguve as a feeder service or use A Re Yeng buses. 'In some areas we will have dedicated bus lanes, but in other areas there will be feeder buses. It has not been finalised whether we will use affected operators to feed into our system.'

Other issues the council still had to decide on were fares and parking garages for commuters.

'Council still has to decide on the price, but it will not be expensive. It will be benchmarked against public transport fares.

'We are also doing a study on parking garages. We need to check how many we need and where in the city they will be.'

Madlala said the study would be completed by next year. The first phase would run from Nana Sita Street, past University Road to the suburbs of Arcadia and Hatfield, looping back to University Road.

The whole system should be operational by 2016.

The R3.5bn project is expected to start operating in April.