Cape Town city officials yesterday inspected a Clifton bungalow belonging to the son of the Equatorial Guinea president, bought for over R23 million nine years ago, and said they would be taking legal steps against the absent owner. 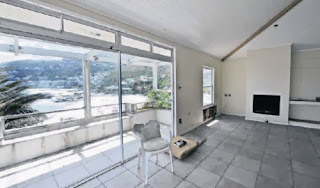 
The bungalow, with sprawling views over Fourth Beach, was bought by Teodoro Nguema Obiang Mangue in 2004, for R23.5m.

Mangue is also the vice president of Equatorial Guinea, and the Minister of Agriculture. He also owns a Bishopscourt mansion which was purchased in 2004 and left empty. It was put on the market for R35m in 2011.

Equatorial Guinea is a tiny oil-rich former Spanish colony of about 720 000 people.

Officials visited the bungalow yesterday following complaints from the Clifton Bungalow Owners' Association, which says the derelict house has 'lowered the value of the neighbourhood' and is overrun by vagrants and rats.

Officials said the building would be declared unfit and that Mangue would receive a Problem Building notice.

Wayne Aldridge, the building inspector who has been in charge of the case, said Mangue would be issued a notice of intention giving him seven days to motivate why his home should not be placed on the problem buildings list. Should Mangue fail to comply he would be taken to court and ultimately the council could renovate the house at Mangue's expense or demolish it.

According to Emma Fonzari of the Clifton Bungalow Owners' Association, a complaint was lodged three years ago regarding the dilapidated state of the house, and it was then placed on the problem building list.

However it was consequently removed after Mangue's attorney in Pretoria wrote a letter promising renovations, an upgrade and a security guard.

Neighbours are adamant that none of these issues have been addressed. However, there was a security guard there when the Cape Times arrived yesterday morning. He said he had not seen any sign of vagrants on the property.

Inside, the paint was peeling, ceilings had caved in and electrical wires were exposed, and there was dirt strewn around the rooms. The security guard, who said he had been at the bungalow since March, said: 'If you look inside, it is clear the house should be knocked down.'
In a 2006 Cape Town court case, Mangue was sued for outstanding debts to various people in South Africa seeking the attachment of some of his properties and assets. In the court case it was revealed that Mangue owned three luxury cars worth R10m and properties valued at R49m in Cape Town.

Mangue has also been resisting attempts by the US administration to seize some $71m worth of his assets, denying charges that they were obtained with funds allegedly obtained corruptly from his country.

US authorities in 2011 filed a bid to seize a $30m Malibu, California, ocean front home, a $38.5m Gulfstream jet, a Ferrari worth more than $500 000 and dozens of items of Michael Jackson memorabilia worth almost $2m.

They argued that Mangue had obtained the items with money taken corruptly from his impoverished country through a variety of alleged schemes, including requiring companies to pay so-called taxes and fees to him as well as make donations to pet projects.