For anyone born before the 1980s, John Orr's was synonymous with shopping for the whole family, and a visit to the Dr Pixley kaSeme (West) Street department store was an outing to be savoured. 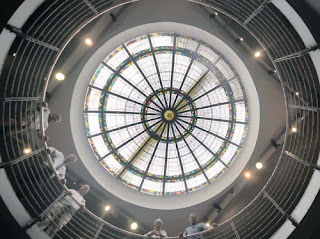 The newly restored glass dome at the Jetmart store.

It sold everything, including the proverbial kitchen sink, and was a one-stop destination for families.

Finally, however, it could not compete with the new breed of chain store and the Durban store and its counterparts elsewhere in the country were sold about 30 years ago.

It was the end of an illustrious chapter in the history of Durban commerce. Today only the shells of the handsome original buildings remain.

But an exciting discovery three years ago led to renewed interest in the building from architects and historians.

The unveiling of a magnificent leaded glass dome in the centre of what is now Jetmart Stores will give shoppers a glimpse of the grandeur of shopping emporiums of yesteryear. 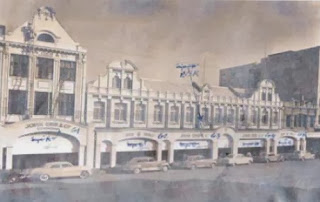 The John Orr building in then West Street, when it was still a bustling department store.

The Sunday Tribune was tipped off by Arthur Gammage of the city's architecture department, who is passionate about the history of Durban's buildings.

He pointed the way to architects Walker Smith, the company responsible for a major renovation of the building that is nearing completion.

Patrick Smith, one of the firm's partners, said it was not often they found an unexpected treasure in a building that had undergone many additions and alterations since it was built at the end of the 19th century.

'We were called in to do an assessment of the structure about three years ago and found that sections of the original building were in a very poor condition due to white ant and borer infestation,' he told the Sunday Tribune on site, standing two levels below the glowing colours of the multi-paned dome.

'When we discovered the glass dome, behind layers of plaster and masonite board, we felt that come hell or high water, we were going to get it restored.

'The dome was covered in a century of pigeon droppings and severely damaged when holes were broken through it to install strip lighting in the shop, but we knew just the team for the job, and they have exceeded our most optimistic expectations. 'We hired the Blignauts of Meta Stained Glass in Hillcrest because they are the best in the business.

'Work started in June and it took four months to complete, because it involved 60 main panels and thousands of small segments of plain and coloured glass.

'We have covered the top of the dome with polycarbonate sheeting to protect it from birds, and hailstorms that might arise.'

The father and sons team at Meta has been responsible for a number of major Durban restoration projects and many private commissions in period homes in KZN.

In the tradition of oldschool craft guilds, all the male members of the family - dad Roy Blignaut and sons Hylton and Graeme - work side by side, practising a time-honoured craft.

Hylton said while the job had been 'a dream assignment', it had not been without its challenges.

'We had to perch on precarious, wobbly scaffolding and fit each segment from above. It was hair-raising at times, particularly when we were working with the larger panes of glass.

'One miscalculation and we would have crashed through the dome and down two floors,' he said.

The result of the combined labours of the architects and the Blignauts is a sight for sore eyes, and one you will soon be able to feast on when the Jetmart store reopens in just a few weeks.