Tshwane residents are being given a chance to comment on the proposed multibillion-rand development on the site of the troubled Centurion Lake.

The development would be known as Symbio-City, with the tallest building in Africa, once it sees the light, subject to successful completion of land alienation and zoning processes. 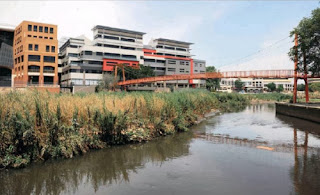 Project leader Roger Warren told the Pretoria News that plans for the development were with the municipality and, to his knowledge, public participation and zoning processes had started. The land is owned by the Tshwane Metropolitan Municipality.

'We have gone to great lengths to ensure the correct procedures are followed and adhered to,' said Warren, who announced proposals for the R17 billion development in May last year.

Earlier this month, the City of Tshwane initiated a public participation process on the proposed rehabilitation of the lake, which used to be a popular attraction, drawing thousands of people, but which is now a stinking eyesore.

Warren said Symbio-City would not interfere with this process or with plans to rehabilitate the onetime pride of Centurion.

'Centurion Lake is man-made and part of a river. In terms of the proposed plans, the lake would be reconverted into a river, which would most probably flow under the new development. There are countless possibilities and options of what can be done with the lake, and these include the creation of a water feature of some sort.

'We have roped in experienced architects to work on the project and plan for the river to create a development that would enhance the environment and the entire area.'
The project would create an estimated 10 910 jobs during the construction phase, and 4 804 when it was complete.

Symbio-City would be about 110 storeys high and flanked by two other towers, of 80 and 60 levels, and would be one of the top 10 skyscrapers in the world.

The building would be taller than the 102-storey Empire State building in New York and overtake the Carlton Centre in Joburg as South Africa's tallest building.

The Tshwane conference centre planned for the vacant lot next to the Centurion Mall would be included in the development.

City of Tshwane spokesman Selby Bokaba said: 'The development of the Centurion metropolitan node is part of the city's Vision 2055. This specific location in Gauteng has the potential to enhance the regional economy into a considerable economy that will attract international commercial interest.

'The location is between the Ben Schoeman Highway and the N1 corridor and is adjacent to the Gautrain station. It forms part of the development corridor of Gauteng and is an environment surrounded by businesses, offices and residential and commercial facilities.'