Pretoria's Loftus Versfeld and its surroundings are set to get a massive economic and aesthetic upgrade with the construction of a R1.2 billion shopping and office precinct which is expected to be operational by the beginning of 2016. 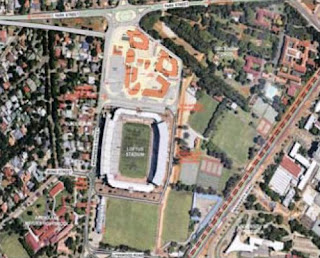 An aerial view of the site plan and road networks.

The project, which will consist of shops, restaurants, an office park, a hotel, a gym and a sports museum, is expected to break ground in the middle of next year, with the construction of the entire development set to last 18 months.

This futuristic and environmentally friendly project will be positioned at the corner of Park and Kirkness streets and will be bordered by Pretoria High School for Girls and Loftus Versfeld Stadium. The development which will occupy the entire tennis court and the open field parking on the north side of the stadium was presented by Abland (Pty) Ltd yesterday. Abland is a property development company with a significant presence in the city through developments such as the Centurion Lifestyle Centre, Wonderboom Junction Retail Centre, Hazeldean (Pretoria east), Riverside in Centurion and, in Joburg, Alice Lane in Sandton and The Pivot at Montecasino.

An artist's impression of the proposed development.

Abland director Thinus Delport yesterday confirmed that the project planning was at an advanced stage and that upon completion, Loftus Park would be the first green star precinct in the country. 'It is in excess of R1 billion and we estimate that the value will be between R1bn and R1.2bn on completion.

'We are looking at making all the buildings a green star rating which is obviously important for how you develop these days and we are going to try and make it a green precinct which would be a first for South Africa,' said Delport.

Negotiations with anchor tenants also seem to be progressing well with giant food retailer Spar and hotel group Tsogo Sun set to be the major tenants within the precinct.

The old Northern Transvaal Tennis Union heritage building (the old Sin Bin) will also be restored and will find a place within the precinct.

'It's the Heritage Building of the Northern Transvaal Tennis Union. It was their old clubhouse and they have relocated to Groenkloof so we are restoring the building and are going to make commercial use of the building,' said Delport.

However, the biggest and only headache for the development will seemingly come from the traffic congestion. It is already a problem in the area with four major city schools and the roads being the link between the east of the city and the city centre.

Delport, though, is optimistic that in time the development will force traffic north of the precinct towards Francis Baard, Pretorius and Stanza Bopape streets with most commuters opting to use the soonto-be completed Tshwane Bus Rapid Transit system and the Gautrain bus and rail system to get to the precinct. 'It is a positive reaction (from the public) and obviously people have comments. We've been engaging for 18 months with the various communities around the stadium in order to be responsible and also get public buy-in from all parties, because this is the type of site where you can't ignore the public and the community.

'We got good buy-in from the city council. One aspect that needs resolution is traffic. Obviously the stadium and the precinct attracts a lot of traffic and we are looking for better ways to get traffic out of the area. We have a lot of official and political support from the council,' Delport said.

The Blue Bulls Rugby Union and the ailing club, amateur and development rugby programmes within the city of Tshwane will also benefit from the development of the precinct. The BBRU is reportedly set to receive R30 million over a decade with more money expected to pour into the kitty over the duration of the 99-year lease that will be reviewed every 15 years.

'The union will benefit on a perpetual basis from the development. They have input into what we are doing and the aesthetics and the way it is developed in order to preserve their heritage as well. We are fortunate to have a site like Loftus which is a landmark in Pretoria. We hope that all this development and the positive aspects to this development will complement the stadium and all the facilities of the stadium and make it an even bigger landmark,' Delport said.

'We are really looking forward to this. For all rugby unions across the country it is a huge challenge to manage amateur and club rugby. This is a huge opportunity for the BBRU to have a sustainable income for the clubs. This constant flow of capital will also strengthen our development with our main focus being on the whole of Tshwane,' Hare said yesterday.