Tshwane's central business district and transport system are undergoing major changes to transform the city into a modern capital, one that will also maintain its heritage like its famed jacaranda trees. 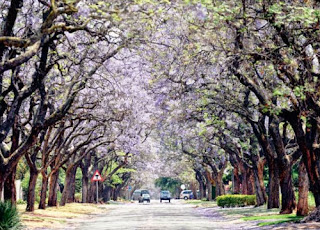 Jacaranda trees are in full bloom, lining many of the streets of Pretoria, and the beautiful purple blossoms are a huge tourist attraction.

Come October and the city's jacaranda trees are in full bloom, their blossoms forming a purple carpet on pavements and lawns.

Streets in the CBD like Minnaar and Johannes Ramokhoase are lined with jacaranda trees planted more than a century ago.

The first jacaranda, a native of South America, was planted in Burgers Park.

City of Tshwane spokesman Selby Moeketsi Bokaba said the municipality was doing all it could to preserve the trees lining some of the older streets of the capital.

Concerns were raised when motorists spotted jacaranda trees being cut down in Paul Kruger and Walton Jameson streets.

Bokaba said preparatory works, including the relocation of trees and services, were usually done before any construction of the Tshwane Rapid Transit system - A Re Yeng - could start.

He said for the inception phase of the Tshwane Rapid Transit system, which runs from the CBD to Hatfield, 32 jacaranda trees were cut and 34 transplanted/relocated in the same vicinity to maintain the ambience of the area. 'In cases where space was limited to plant the tree, they were transplanted along the same corridor along Nana Sita, Kotzé and Jorissen streets.'

Bokaba said jacaranda trees had been classified as alien trees and could not be replaced by young ones.

'Pretoria is referred to as Jacaranda City and after much deliberation, it was decided together with the Heritage Authority, residents' associations, the Tshwane Parks Department and the landscape architect on the TRT project that they may be transplanted within the same vicinity.'

The jacaranda has become a symbol of the city and Tshwane first mayor Father Smangaliso Mkhatshwa and former water affairs and forestry minister Ronnie Kasrils unveiled a monument to the jacaranda as a symbol of support for refugees.

On Line 1A - the second phase of A Re Yeng down Paul Kruger Street to Rainbow Junction in the north of Pretoria - affected jacaranda trees were transplanted in designated positions closest to where they were removed.

There are jacarandas around the University of Pretoria's Hatfield campus, which is good news for students, as there is a myth that if a flower from the trees drops on your head, you will pass all your exams.