Seven new Gautrain routes are set to be built over the next 25 years, and they will stretch from Soweto to Tshwane East. 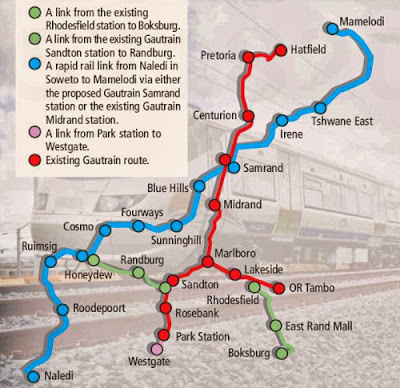 In other changes, Gautrain buses will be phased out, and more use made of branded taxis that will transport commuters to and from the new stations.

Construction is expected to start in the next four to five years.

The new routes form part of Gauteng's 25-year master transport plan that will try to curb mega traffic congestion which will see the number of cars in Gauteng almost double from 3.65 million to 6.57 million.

The new routes will be introduced in stages.

Some of the routes, including the Soweto routes where rail infrastructure already exists, could be amalgamated with Metrorail routes.

'This is not because we are catering for the wealthy only with the Gautrain.

'The 2 800 new train coaches which have been purchased by the Passenger Rail Agency of South Africa are equivalent in quality and safety to the Gautrain coaches.

'The systems will be operated at the same standards of safety and punctuality.

He added that currently, 125 Gautrain buses carried about 33 percent of the train's passengers, 'We are not planning on getting in many more buses - perhaps 30 or 40,' he said.

The affected municipalities will have to assist in curbing traffic by reviewing their landuse management.

'They are all focusing on increased densities in new developments and densifying in CBDs where possible.

'They are also going to have to curb urban spread and contain it within their current boundaries,' said Van der Merwe.

Transport MEC Ismail Vadi said the Gautrain routes should not be looked at in isolation.

They had to be seen as a broader plan, integrating all modes of transport in the municipalities of Joburg, Ekurhuleni and Tshwane.

'Rail will be the backbone of public transport, including Metrorail, and there will be one managing authority for all rail transport established,' Vadi said.

The bus rapid transit (BRT) systems are being set up and extended in all three major municipalities, and they will be integrated with railway stations and other forms of transport.

'When all the planned BRT systems are up and running, there will be over 1 000km of bus network in the three municipalities,' the MEC said.