Pretoria getting largest statue of Mandela

It is 9m tall, weighs four tons and is said to be the largest statue of Nelson Mandela. 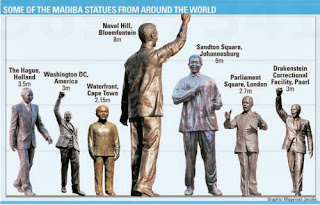 The bronze-coated artwork spent hours on the road travelling from Cape Town this week and arrived yesterday at the Union Buildings in Pretoria, where it is to be assembled and unveiled on Monday.

'This is the largest Mandela statue in the world and we believe it is the best,' said Sarah Haines of Koketso Growth, which managed the project.

The Department of Arts and Culture also believed it to be the world's biggest statue of Madiba, spokesman Mack Lewele said.

The statue, created by South African artists Andre Prinsloo and Ruhan Janse van Vuuren, was cast at four foundries, two of them in Cape Town, where it was initially assembled.

It is among dozens of statues, sculptures, artworks and monuments honouring the statesman.

An 8m statue of Mandela was unveiled in Mangaung last December.

At the time, it was believed to be the tallest in the world.

An art piece, possibly a statue, is also in the pipeline for Cape Town, but whether it will be as high as either of the tallest statues remains a matter of discussion.

The chairman of the City of Cape Town's naming committee, Brett Herron, said a motion had been tabled and supported to erect a statue or public piece to celebrate Mandela.

Parliament had also been considering erecting a statue.

The city and Parliament were now working on the project together.

The details were not yet clear, however, and Herron said it was too early to say when the project would be completed.

However, there were many reasons for ensuring that the project - or at least the design process - would be launched next year, among them that it would be the 20th anniversary of the country's democracy and that Cape Town would be World Design Capital.

'The details of the statue will be the subject of discussions between the city and Parliament,' said Herron.

'Those discussions will resume in the New Year, when we will seek to reach agreement on the location of the installation and the process to be adopted to procure the statue.'

Those behind the Union Buildings statue, meanwhile, will spend the next few days assembling it.

According to media reports, R8 million.

Haines said it had been initiated by the Presidency and the Ministry of Arts and Culture in honour of the landmark democracy anniversary next year, as well the centenary of the Union Buildings.

To make way for the statue, they would have to move a statue of former prime minister General JBM Hertzog, which would be repositioned next year.

'It's been a collaborative process to decide on the approach and so on. There's a large team of people involved,' Haines said. The statue could be described as 'warm and inclusive'.