December 12, 2013
Please see the Article from the Star Newspaper below.

I was priviledged to be invited to a SAPOA dinner with Mayor Parks Tau as part of the representation of the Property Industry where the Corridors of Freedom were presented.

The attendees at the Dinner received information packs from the City of Joburg containing detailed information on the Corridors of Freedom.  You are welcome to contact me at gareth@propertylaw.onmicrosoft.com if you would like more information.

I have also posted on the Blog on a number of occassions that I believe that desification of South African cities is the ONLY viable way of dealing with infrastructure issues (especially transport).

Joburg's Empire/Perth road corridor is set for major densification as it becomes the second area identified as a 'corridor of freedom' by the city. 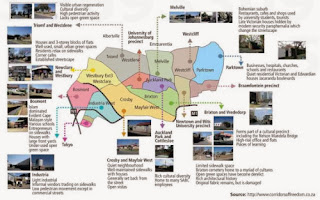 This has brought many objections from residents who claim they have not been consulted properly and are concerned that the high-density, multiple-storey housing which is to be built, will destroy the character of the historic suburbs.

He said the city cannot continue 'banishing' the poor to the periphery of the city, where there is little or no infrastructure, while there are declining areas with good infrastructure and job opportunities close to the city.

The corridor lies within Region B, an area covering several suburbs - including those close to the universities, which have been plagued by property owners and unscrupulous business people illegally converting small houses into student accommodation, cramming numerous students into small spaces.

This has led to a serious decline in property values.

The city says this corridor - which houses two universities, the SABC and several hospitals - is ideal because of its transport system, the Rea Vaya, which started running in October.

The densification plan involves building between 200 to 500 housing units per hectare in five- to eight-storey buildings on land along Empire and Perth roads, encroaching between 400m and 1.2km into the suburbs.

Ward 69 councillor Katja Naumann confirmed the public participation process had been extended to March because of the objections.

'Based on the advice of the lawyers who formed part of the working group, we now have to give the city time to respond to our objection before we proceed with further action,' she said.

One of the myths being spread, she said, was that the University of Johannesburg would need about 28 000 beds in future. But this was untrue.

'The university told us, during public meetings, that it will not be expanding student numbers and that Braamfontein has more than 1 000 free beds still available. Of the 600 communes in my ward, many are struggling to fill all their rooms,' she said.

In its report on the establishment of the corridor of freedom, the city says the area is ideal for densification because it is close to the CBD and other economic nodes such as Rosebank and Parktown, and is a gateway between the traditionally marginalised areas of Westbury, Coronationville and Sophiatown and educational and recreational and economic facilities and opportunities.

'There are plenty of precedents worldwide that demonstrate the benefits of densification to make high-quality public spaces feasible, contribute to higher property values, social cohesion and a higher sense of community and offer better security and lower crime because of the number of people on the streets,' said the report. Resident Georg Knoke said he was concerned that private developers 'who have no heart and just want money' are being encouraged to buy properties and start developing high-rise buildings.

'This news comes like a thief in the night. How on earth does the city council dare to demolish two of the oldest suburbs in Joburg, which date to 1900 and before? We cannot lose our heritage to unscrupulous developers,' he said.