Residents of the eThekwini metro are most likely to have passed Grade 12, but are least likely to have settled their bonds. And while people employed in Joburg will earn more in a year on average than in any other major city, Cape Town has the fewest jobless. 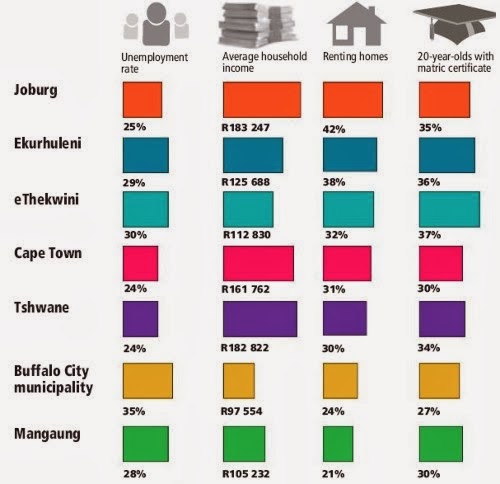 These are among the statistics compiled by the South African Institute of Race Relations, which give insight into standards of living in the country's eight metros.

The metros (and 44 district municipalities) were compared in 55 categories, including education, household assets and access to basic services.

The report states that although over the past decade 4.5 million households have been provided with water, 4 million with sanitation and 2 million with electricity, discontent with local government service delivery is growing.

The statistics show that 32 percent of eThekwini residents have landlords, and just 22 percent of homeowners have paid off their bond in full.

Ninety percent of households are able to switch on the lights, 97 percent have access to tapped water and 76 percent have flushing toilets.

Of all the metros, eThekwini has a relatively well schooled population, boasting the highest proportion of people aged 20 and older with a matric certificate.

However, the eThekwini unemployment rate is 30 percent - the third highest of all the metros - and the average annual household income stands at R112 830 (behind Joburg, Tshwane, Cape Town and Ekurhuleni).

The unemployment rate refers to people aged between 15 and 64 who are without work but looking for jobs.

Among the KwaZulu-Natal district municipalities, the mainly rural Umkhanyakude (Jozini) fares poorest in terms of access to electricity for lighting, with 62 percent of households still without power. Sixty-two percent of its residents are also without access to running water.

Turning to the rest of the country, the metropolitan municipality that has the highest proportion of households with an income below R2 300 a month is Buffalo City (East London).

The Nelson Mandela Bay metro (Port Elizabeth) has the highest rate of unemployment, at 37 percent.