The Sanlam Middestad building in Pretoria goes under the hammer next Wednesday as Nedbank tries to recoup some of the money owed to it by controversial owner and business mogul Roux Shabangu. 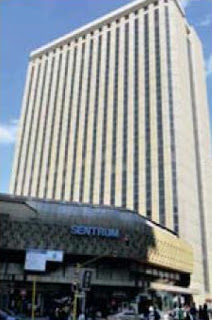 The Sanlam Middestad building in Pretoria.

The building, worth R850 million, has been at the centre of controversy since Shabangu bought it in 2011.

It will be sold to the highest bidder after the Pretoria High Court granted the bank the right to recover costs related to Shabangu's acquisition of the building.

The bank granted Roux Property Fund a R320m bond in January 2011, and payment was granted on the basis that a valid long-term lease agreement was signed by the Department of Public Works as the lessee.

The SAPS took occupation of the building in 2011 in a R500m lease agreement, sparking controversy when accusations of a 'corrupt relationship' between Shabangu and the then national commissioner of police Bheki Cele surfaced.

The police had also taken occupation of another building owned by Shabangu in Durban, and reports around the controversial leases implicated the commissioner in the flouting of procurement regulations.

After scrutiny by Public Protector Thuli Madonsela, a report was released, and it said that the lease agreement had been the result of a negotiated contract instead of competitive bidding.

Madonsela said the lease agreements had been entered into unlawfully.

Public hearings by the board of inquiry, led by Judge Jake Moloi, found Cele unfit to hold office. He was fired from his position by President Jacob Zuma.

Yesterday Nedbank confirmed that the Pretoria High Court had given the green light to its bid to sell the property to recover costs related to Shabangu's acquisition of the building.

'The action follows the breach of payment obligations in respect to finance granted to Roux Property Fund for the acquisition of the said building,' said Anna Isaac, the bank's group legal counsel for its commercial division.

Former public works minister Gwen Mahlangu-Nkabinde and other senior government officials also lost their jobs for their part in the lease of the building.

Retailers renting space in the building also fell victim when they went without electricity for more than a week last year, over a R10m bill owed by Shabangu's company to the City of Tshwane.

The Sanlam Middestad building has been empty since the controversial lease was cancelled, and tenants started abandoning Shabangu.

The triple-storey retail podium with double-storey parking bays and an 18-floor office tower currently has 38 tenants in the retail section with short-term leases.

Ten of the 18 floors are said to have been stripped to a shell, according to the Pretoria central sheriff, who is presiding over the sale of Shabangu's building.

Yesterday Shabangu's spokeswoman Percy Shabangu said they were unable to discuss the sale of the building as it was an ongoing court matter.

She said: 'It is something we cannot discuss, it is in the hands of our lawyers, and they are dealing with it.'