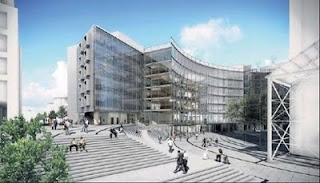 The construction of a six-storey office building at the V&A Waterfront is one of its largest developments since it was established 22 years ago, said its chief executive, David Green.

Green was speaking at yesterday's sod-turning ceremony to mark the construction of the new building which is officially named No 1 Silo. The building is part of a R1 billion development that will extensively refurbish the Clock Tower Precinct over the next four to five years.

"One of the key differentiators of No 1 Silo will be its energy efficiency due to its unique positioning to the ocean and ability to benefit from a sophisticated sea water cooling system," he said.

"The V&A Waterfront is reaffirming itself as one of the most sought-after addresses for businesses operating in South Africa. By combining ease of access, optimal parking and secure living conditions with some of the unsurpassed views in Cape Town, the V&A Waterfront is truly offering the best in lifestyle options in a centralised and secure location."

According to Anya van der Merwe, director at Van Der Merwe Miszewski Architects, the building has been registered as a Green Star SA Office Design and is aiming for at least a four-star Green Star rating. The Green Star rating was established by the Green Building Council of South Africa in 2008, with the aim of evaluating the potential environmental performance of buildings, based on energy and water efficiency, quality of indoor environments and resource conservation.

V&A Waterfront project manager Mark Noble said the building would have a fully glazed double-skin façade to maximise views towards Table Mountain as well as the ocean, and to ensure "optimal use of natural light".

The entire Clock Tower Precinct redevelopment is expected to attract 5 000 office workers in the next four years. Noble said the Clock Tower Centre had been reconfigured to offer more than 5 000m 2, supplemented by more than 2 500m2 of retail offering.